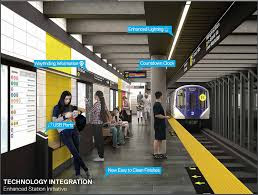 NEW YORK CITY-As part of his $27 billion five-year MTA Capital Program to renew and expand the New York City Metropolitan Transit Authority network, Gov. Andrew Cuomo unveiled the design features of 1,025 new and reimagined subway cars, which will include enhancements to the regular cars, in addition to the creation of up to 750 “Open Car End” designed-cars.

The R211 is a future new technology (NTT) New York City Subway car for the B Division. The MTA will invest $2.956 billion in this 1,025-car order. These future cars are anticipated to replace the remaining R32s, all R44s on the Staten Island Railway and possibly all remaining R46s. The contract's project totals 1025 cars, or 1545 with all options exercised, that will all be linked in 5-car sets. The contract is split into three parts: R211A, R211S, and R211T. The base order of 285 cars will comprise 10 R211T open-gangway prototype cars, 75 R211S cars to replace the remaining 63-car R44 fleet on the Staten Island Railway, and 200 R211A cars that will partially replace the 752 aging R46 cars as well as R32s that are not replaced by the R179s. There will be an option for either 740 R211A or R211T cars, depending on the success of the prototype R211T. These cars would finish replacing the older R32s and R46s. There would also be one additional option for up to 520 cars, meaning that the total number of cars in the fleet could total 1545.  Any additional cars not replacing existing rolling stock will be used to expand the system's fleet. The R211Ts will be designed to increase capacity and allow passengers to walk seamlessly from one car to the next. The new cars will have Wi-Fi installed, USB chargers, digital advertisements, digital customer information displays, illuminated door opening alerts, and security cameras. It was announced in July 2016 that the cars would have open gangways that allowed passengers to move between cars during train movement. 424 stations out of the 472+ stations in the subway system that serves two or more subway lines will be renovated into the 21st Century. You can see my commentary here. For more Transportation Hub, please subscribe today.

Credit goes to Queens Courier & Wikipedia for this info.

What do you guys think about the upcoming R211 Cars? Please comment below.
Posted by The Hub Chronicles at 9:30 AM