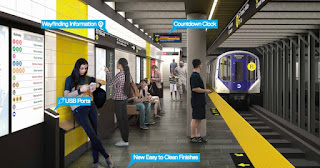 After the 53rd Street station closes, the Bay Ridge Avenue stop will follow suit on April 29th, and the Prospect Av station will close on June 5th. The MTA and New York State Govenor Andrew Cuomo argue that closing the stations for six months straight with one contractor will ultimately save time and money, as opposed to doing the work piecemeal and running trains through the stations on a limited basis.The project overall is $72 million, with the work performed by Citnalta-Forte Joint Venture. The firm will use a design-build method at these stations, which is the first time that MTA New York City Transit is using the method for delivering construction projects.  The three soon-to-be renovated subway stations opened in 1915 as part of the Brooklyn-Manhattan Transit Corporation. The extensive renovations will require major demolition before work can begin. The three stations will receive renovations from the entrances to the turnstile areas to the mezzanines and platforms. It features infrastructure work such as concrete and steel repairs, new platform edges, waterproofing, upgraded electrical and communications systems.
Once completed, customers will see refurbished entrances with new handrails, stair treads, wall tiles, totems and digital screens that provide real-time service information at the street level before they even enter the station. Canopies will be installed at select key entrances. Walls and ceilings will be repaired, and new granite flooring, informational dashboards and glass barriers will be installed. LED light fixtures for brighter, more secure areas will be installed, along with security cameras and Help Points. Digital screens for real-time arrival information, updated service information and advertising will be installed. Customer amenities include new station art; electronics charging stations built into station furnishings; new platform edges, and new benches and leaning bars.
This station renovation project will be completed in Fall 2017. In the meantime, we'll have to turn to the B37 (via 3rd Ave) and/or B63 (via 5th Ave), which runs parallel to the (R) Line, for alternate service. The next group of stations that will be renovated are the Broadway, 30 Av, 36 Av, and 39 Av stations along the BMT Astoria (N)(W) Lines in Queens.
Posted by The Hub Chronicles at 8:29 PM No comments: