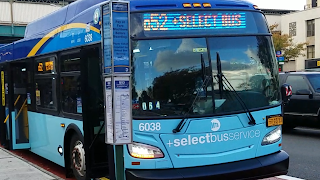 QUEENS, NEW YORK-It is finally here!!! After years and months of community board meetings, reaching out to bus riders, members of the council voicing their opinions/ideas, public design workshops, and meetings throughout all neighborhoods of the corridor, the Woodhaven/Cross Bay Boulevard +SelectBusService+ is a reality come true. The Q52 and Q53 Limited bus routes are the 2nd and 3rd bus routes, after LaGuardia Link Q70 +SBS to join the New York City Bus Rapid Transit Family. Its also the 3rd and 4th routes for Queens, as well as the 16th and 17th bus routes for the city, respectively. The Q52 and Q53 bus routes serve approximately 20,000 daily riders. The Q52 and Q53 provide north-south service along the Woodhaven and Cross Bay Boulevards corridors connecting the neighborhoods of Woodside, Jackson Heights, Elmhurst, Rego Park, Middle Village, Forest Hills, Glendale, Woodhaven, Richmond Hill, Ozone Park and Howard Beach, Broad Channel, Rockaway Beach, Arverne and Rockaway Park in Queens. The Q52 and Q53 also serve as an important subway feeder to the (7)(7X)(A)(E)(F)(M)(R)(J)(Z)(S-Rockaway Park Shuttle) trains and the Long Island Rail Road in addition to serving Queens Center Mall, Elmhurst Hospital Center, Rego Park Center, Forest Park and the Jamaica Bay Wildlife Refuge.

Q52 +SBS and Q53 +SBS has been launched on November 12th, 2017. Woodhaven Boulevard, which becomes Cross Bay Boulevard in the Howard Beach area, is a major north-south thoroughfare in Queens that serves major residential and commercial areas. Currently, the corridor is served by the Q52 and Q53 Limited; Q11 and Q21 local; and BM5, QM15, QM16 and QM17 express bus routes, carrying a total of more than 31,000 people daily, many of whom use these routes to connect the subway lines mentioned above, or the Long Island Rail Road’s Woodside Station. An average of 20,000 weekday customers rely on the Q52/Q53 Limited routes, which spans approximately 14 miles. As part of the process to introduce Select Bus Service to the corridor and to implement street changes, MTA Bus and NYCDOT participated in or hosted more than 20 community meetings and public workshops to solicit public feedback. A Community Advisory Committee comprising elected officials, community boards and various stakeholders was also convened to provide guidance for the design and implementation of Select Bus Service. The Q52 +SBS (Elmhurst to Arverne) is based out of the JFK Bus Depot (even though a it's a Far Rockaway route), and operates between 5am and 1am.
The Q53 +SBS (Woodside to Rockaway Park) is based out of the LaGuardia Bus Depot and operates at all times. 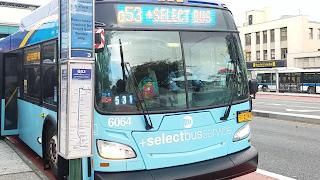 The Q52/Q53 SBS supplements the many existing local bus routes on Woodhaven and Cross Bay boulevards by offering customers a ride faster than the existing limited bus service, thanks to improved bus stop spacing and several features that are unique to Select Bus Service. These features include off-board fare payment at SBS fare machines, which allows customers to pay fares before boarding at any of three doors on the buses. As a result, customers no longer have to wait to insert their MetroCards or cash at the bus fare box. The SBS fleet features the MTA’s newest, specially branded, articulated buses that feature distinctive SBS signage to differentiate them from local bus service. Traffic signal priority technology, which has proven to speed bus travel on other SBS routes, will be installed on the Woodhaven/Cross Bay Boulevard corridor in the coming years. Customers also will benefit from new wayfinding signs at many SBS stops that show real-time bus arrival information. Altogether, these features have proven to decrease travel times for customers on other SBS routes by as much as 20 percent while attracting new ridership by 10 percent. The push to bring Select Bus Service to more routes across the city is part of the MTA and NYCDOT’s broader efforts to improve bus service and attract new ridership. The MTA is in the process of upgrading its bus fleet with higher capacity buses, advanced operational technology such as traffic signal priority and pedestrian and collision safety warning systems, upgraded security systems and modern customer amenities such as digital information screens, USB charging ports and Wi-Fi.

Posted by The Hub Chronicles at 10:50 PM