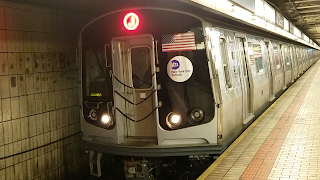 **This post was originally supposed to be published in December 2017, so this post reflects the events transpired in 2017**

NEW YORK-We have so much in the Transportation world in the year of 2017. We have had the good, the bad, and the downright rarity that is the New York City Transportation System. So much has transpired within 2017, it can only be explained in descriptive detail. There is still much work that needs to be done on improving the aging New York City Subway system. All the events that transpired in 2017 will sure be to go down in the history books.

In January, an event that occurred was a century in the making. the brand new IND Second Avenue Subway Line was open for the public on New Years Day. New stations open along 2nd Ave on the Upper East Side at 96th, 86th,and 72nd Streets, extending the (Q) Line with an across the platform transfer to the (F) Train at Lexington Avenue-63rd Street. It also saw increase in service and relieves on the overcrowded IRT Lexington Avenue Line by 40%. We've also experience major service changes affecting weekend service along C, F,and G Lines, due track work between Jay St-MetroTech and Bergen Street. (D) and (F) Trains were rerouted to the subway lines during the weekend back in February, September, and October, due to track, signal, and electrical work along the IND 6th Avenue Line. In preparation for the Canarsie Tube shutdown43 for Fix and Fortify Hurricane Sandy Recovery Work, on Memorial Day weekend, the MTA closed (L) Train service between Broadway Junction and 8th Avenue, Manhattan. (M) train service was sent up to 96th Street/2nd Avenue. The entire BMT Broadway Line has gotten a dosage of the IND Second Avenue Subway; the (Q), which operates along that corridor at all times, the (N), which rides on that line during rush hours, the (W), which runs via 2nd Ave during weekdays in case of a General Order on the BMT Astoria Line, and the (R), which runs on the line only one AM rush hour trip. In June, a downtown (F) train lost power due to a major heat wave underground and a downtown (A) train was derailed, crippling service. After 4 years of Hurricane Sandy, the new South Ferry station was reopened for business, thus closing the old South Ferry station loop. Clark Street Tube closures shook things up for weekend (2), (3),and (5) train riders. The closure was for a year-long consecutive Hurricane Sandy recovery work. (2) & (3) train service were suspended between Lower Manhattan and Brooklyn. (2) train service operated between Dyre Ave, The Bronx and South Ferry, Manhattan, with local service between 34th St-Penn Station and Chambers St. (3) train service operated in Manhattan between 148th St and 14th St, via 7th Ave Express. (5) train service operated 241st St, The Bronx and Flatbush Ave, Brooklyn, via Bronx/Brooklyn Local, and Lexington Ave Express. (4) train service operated to/from New Lots Ave, Brooklyn. From July 1, 2017 to April 30, 2018, reconstruction of two sections of the BMT Myrtle Avenue Line—the approaches to the line's junction with the BMT Jamaica Line and Fresh Pond Bridge over the Long Island Rail Road's Montauk Branch in Queens—required a reroute of (M) service. Trains to and from Manhattan and Queens, instead of going to Metropolitan Avenue, ran via the BMT Jamaica Line between Myrtle Avenue–Broadway and Broadway Junction at all times except late nights, when service was suspended. A limited amount of rush hour trains ran between 71st Avenue in Queens and Second Avenue in Manhattan, replicating the (V) train's routing prior to its discontinuation in 2010. Three shuttle bus routes ran during reconstruction of the Fresh Pond Bridge: one between Myrtle Avenue–Broadway and Fresh Pond Road; the second between Myrtle–Broadway and Metropolitan Avenues, skipping the Fresh Pond Road station during the daytime hours; and the third between Flushing Avenue/Broadway and Middle Village–Metropolitan Avenue, stopping at Flushing and Wyckoff Avenues for a transfer to the BMT Canarsie Line at Jefferson Street.When the Fresh Pond Bridge project was completed on September 2, two six-car shuttle trains began operating between Metropolitan and Wyckoff Avenues at all times, running separately from each other on each of the two tracks; two additional six-car trains were stored in the Fresh Pond Yard in order to swap consists in and out of service. These shuttles, along with a shuttle bus route that provided service between Wyckoff Avenue and Broadway, ran until April 27, 2018. The soutbound (F) and northbound (N) train platforms reopened and Phase II was the start for the opposite platforms to be repaired. We have also experienced R62As on the (4), R142s roaming the (6) and the testing and the arrival of the Bombardier R179 back in November 2017. There multiple occasions when the clock had to be reset due to the malfunctioning of the doors, etc.

**PLEASE KEEP ON READING; IMPORTANT MESSAGE DOWN BELOW**

Hey guys. I know for a fact that I was way behind with my posts. The reason I wasn't able to post from November 2017 all the way until now is because I was dealing with my personal issues and I wasn't able to do blog writting and video uploading at once. But now, I am back in the groove and I have so much transportation stories to share with all of you. My next post will be about the transit events that occured between January 2018 up until now. And also, be on the lookout for my Instagram Page, which will launch on 07/06/2018 at 12 PM. In the meantime, please, enjoy the Hub.
Posted by The Hub Chronicles at 12:00 PM