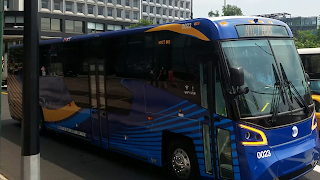 NEW YORK, NY-2018 was a roller coaster year in the transportation content. We have witnessed it all from new train/bus deliveries to major retirement of some bus models. In January 2018, the 2017 New Flyer XD40 (Cuomo-scheme edition) to Jamaica Bus Depot in Queens. The passing evaluation of this bus model kick started the delivery and production of this bus model; making its presence known at the Michael J. Quill (Manhattan), Fresh Pond (Brooklyn), Flatbush (Brooklyn; +SBS scheme), Grand Avenue (Brooklyn), Ulmer Park (Brooklyn), East New York (Brooklyn; +SBS and Local schemes) and even the West Farms Depot in the Bronx. The city also had the opportunity to operate two types of electric powered buses; the Proterra Catalyst BE40 at Grand Avenue depot and the New Flyer XE40 at Michael J. Quill. They're only 5 units per depot, currently on a 3-year lease, and will swap depots in July 2019. The 2018 New Flyer XN60s (the city's first articulated bus) arrived to the MTA, starting with unit 1016, and then some +SBS assigned units arrived to West Farms (17 of them) for the Bx6 +SBS. 55 others will also be assigned to West Farms, which makes it a total of 72 units, while 38 of those buses will be headed to the Jackie Gleason Bus Depot, an overall total of 110 buses. The agency was also awarded 10 New Flyer XDE40s for testing of hybrid-electric buses all have been housed at the Grand Avenue Bus Depot. On Monday, October 1st, after months of preparation and protests from the communities the route serves, the B82 Limited (weekday rush hours only) became the brand new B82 +SelectBusService, which is the first to operate weekdays only, between Spring Creek Towers and Bensonhurst; no service to Coney Island. Lastly, the Novabus Low Floor Series. Unit 8504, an LFS, made its presence known doing runs on certain Gun Hill (Bronx) depot routes. Lastly, we had the Alexander Dennis Enviro SuperLo 500 #0022 did testing back in Spring 2018 on the X17J route (now SIM8/8x); the bus failed testing. In June 2018, the MTA recieved the MCI D45 CRT LE Demonstrator #23. This bus ran on express routes in the South Brooklyn, Staten Island, and the Bronx bus divisions. Finally, as part of the Staten Island bus study, the MTA has reformed the entire Staten Island express bus network. More information here.

Now, onto the subways. The Bombardier R179 four-car sets, officially entered revenue service on December 27, 2017, just five days before New Years Day 2018, making their runs on the (C) and (J)/(Z) Lines all throughout 2018. The pilot five-car R179 sets underwent specification modifications at Bombardier's Kanona Facility in summer 2018 and were re-delivered for further testing. By the start of December 2018, some trains had to be taken out of service due to manufacturing defects and HVAC software bugs. The next month, the MTA revealed that 162 cars had been delivered, of which 128 (comprising sixteen 8-car trains) had been placed in service. In early January 2019, NYCTA President Andy Byford ordered more of cars to be removed from passenger service and the temporary suspension of the delivery of further cars until Bombardier corrected all defects found within them. The issues have since been resolved, and deliveries recommenced in early February 2019. On April 30th, 2018, the Myrtle Viaduct has completed construction, restoring (M) service on the BMT Myrtle Avenue Line between Myrtle Av-Broadway and Myrtle-Wyckoff Avenues; full peak-direction (J)/(Z) skip-stop express service restored between Supthin Blvd-JFK and Myrtle Ave-Bway, as well as weekday peak express service between Myrtle Ave-Bway and Marcy Ave. In Summertime of 2018, after 53 consecutive weekends of closure, the Clark Street Tubes has reopened on time after doing repairs from Superstorm Sandy damages, resuming normal weekend services on the (2), (3), (4), & (5) Lines. 30th and 36th Avenue stations have reopened on the BMT Astoria Line after months of closure and repairs, getting the Enhanced Station Initiative treatment. Some stations renovated or ESIed, such as 104th St (BMT Jamaica Line), 163rd, 103rd, 72nd, 86th Sts (IND Eighth Avenue Line), 145th Street (IRT Lenox Avenue Line) & 23rd, 57th Sts (IND Sixth Avenue Line). After nearly 17 years of getting destroyed by the 9/11 terror attacks, the World Trade Center-Cortland Street (IRT Broadway-Seventh Avenue Line) reopened for service.

Posted by The Hub Chronicles at 4:00 PM