NEW YORK, NEW YORK. It seems that we are entering the end of an era of our childhood buses-the Novabus RTS-06. The Metropolitan Transportation Authority plans to retire their oldest buses in their fleet by May 10th. Transit agencies around the world has retired their RTSs except for New York. For some people who don't know what RTS stands for; its stands for Rapid Transit Series, which is a high floor bus. All of today's buses are semi-low floor, with the exception of this certain bus model and the New Flyer D60HF "Galaxy", which also retiring this year.

The agency announced its plans back on Thursday 3/21/2019, with accordance to the analysis conducted by the New York Daily News, stated that Brooklyn's poorest neighborhoods are stuck with them. There are currently less than 200, but more than 100 of these buses still currently in service. The RTS's will be replaced by Novabus FLSs/FLS HEVs and New Flyer XD40s/XDE40s. The other three depots that house the buses are Michael J. Quill depot in Midtown Manhattan, Jamaica depot in Queens, and Ulmer Park depot in Gravesend, Brooklyn. The number of RTS buses in service citywide will drop to 127 by the end of March, 37 by the end of April, and to zero by May 10, agency officials said. “We’re looking forward to modernizing our fleet in every part of the city,” said Darryl Irick, the MTA’s head of buses. "The significant infusion of funds that would come from congestion pricing, if lawmakers approve it, will allow us to do even more to bring the latest buses to every neighborhood.” The buses that will replace the RTS models will still run on diesel in one form or another — the MTA has only a handful of fully-electric buses. Still, the newest diesel buses are more efficient than the ones manufactured in the 1990s, and come with amenities like WiFi and phone charging ports. Environmental justice advocates want the MTA to transition to an entirely electric bus fleet over the next 20 years, which will require major infrastructure upgrades at the agency’s 29 bus depots as well as the implementation of charging stations on city streets.

I wouldn't count on the MTA retiring all of the RTSs by May 10th. Its due to the fact that the some depots in the city has a large surplus of RTSs that are still roaming the streets today. Two of other MTA's oldest buses are/will be retiring this April; 2003 New Flyer D60HF "Galaxy" and the 2003/2004 Orion VII CNG buses. 2019 units of New Flyer XD40s and Novabus LFSs deliveries are currently underway to replace older buses. Another set of buses to go are the 2002-2004 Orion VII 1st Generation. If and/or when all RTSes retire by May 10th, a tribute video of the Novabus RTSes will be aired on Memorial Day 2019. These buses maybe gone, but they will always live forever in our hearts.

UPDATE: East New York Depot has just retired all of their RTSes. Just leaves Jamaica (Queens), Michael J. Quill (Manhattan), and Flatbush/Ulmer Park (Brooklyn) left remaining with these oldies. Lastly, lawmakers and state legislature in Albany has approved the plan of congestion pricing for vehicle drivers entering Manhattan below 61st Street. We still have time on our hands because this won't go into effect until 2021. As of April 30th,2019, all remaining RTSes, D60HFs, and 2003/2004 Orion VII CNG buses have now been retired, which marks the end of the high-floor seriesof buses. 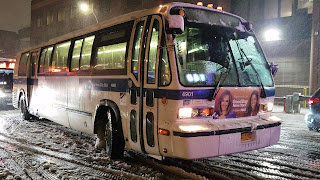