NEW YORK, NY- This past year, the MTA launched the redesign bus network for both the Bronx and Queens. Brooklyn is the third borough to get the redesign network, but that's under review. Okay, let's get to the Bronx. There are routes that will see extensive spacing, increased frequency, direct connections to major hubs/transit centers, and change of the certain bus routes either shortened, rerouted, or extended. The ones that came out to me the most of the Bronx Bus Redesign Plan were the restoration of the Bx25 route, the Bx6 +SBS to Soundview, new M125 route/the termination of the Bx15 route south of 3rd Ave/149th Street, Bx36 and Bx40/42 switching east/west routing, and the changeup of multiple Bronx-Manhattan express routes. Overall, the final plan for the Bronx routes can work well for Bronx residents because most of the routes are still kept the same with minor/major changes to certain bus routes. If you want full details of your Bronx route, you can click here. There is also a proposed final plan hearing set for Thursday, February 20th, 2020. Please check the MTA Bronx Redesign website for more details. Queens is next for this redesign plan. Queens is the total melting pot of New York City with a LARGE bus system, with most of them being a part of the MTA Bus Company. During the draft plan of the Queens Bus Network, all routes are labeled QT during the duration of the draft plan. Redesigned routes are combined up to three current active bus routes. For example, "QT7-Linden Boulevard", which consist of the Q4 and the discontinued Q89 route. This route would operate between Cambria Heights-120th Avenue, Queens and Spring Creek-Gateway Mall, Brooklyn. There's two projected Queens-Bronx routes, two Queens-Manhattan routes, and twelve Queens-Brooklyn bus routes. Queens service has declined over the years. Its now time that the MTA fixes this problem with real hard route structuring and planing from various communities of this borough. You can read up on your Queens routes here. There's also meeting going on all throughout January and February for y'all to give in your feedback on these projected bus routes. 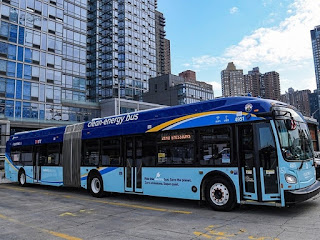 New York City’s MTA announced on December 15, 2019, that it has deployed the first phase of its new all-electric articulated bus fleet. The now historic 2020–2024 Capital Plan includes $1.1 billion to acquire 500 new electric buses to serve all 5 boroughs. This first phase includes 15 buses. The first electric articulated bus recently took off on one of the city’s busiest crosstown routes – the 14th Street busway. New York pedestrians, travelers, and apartment dwellers will eventually find cleaner, fresher air for walking thanks to the zero-emissions buses. The agency’s plan to enhance and modernize the bus fleet with zero-emissions technology will deliver environmental benefits for all New Yorkers, and the city’s many visitors as well. MTA plans to acquire only electric buses beginning in 2029. At present, the MTA operates a fleet of 10 electric standard buses. The electric trial is a 3-year pilot program to test the all-electric technology. The MTA needs reliable durability of around-the-clock four-season usage.

The M60 route, which takes passengers from Laguardia Airport in Queens to Broadway and West 106th street via a long stretch on West 125th Street, will be the toughest challenge yet for the electric buses, MTA officials said. Distance on the route is 20 miles round-trip, and the electric batteries on the bus have a range between 50 to 90 miles depending on factors such as traffic, weather and passenger load. The MTA ordered 15 of the zero-emission buses in January, and deployed four of the vehicles on the M14 line in Lower Manhattan. The fifth bus to be delivered to the MTA will be deployed on the M60 line, transit officials said. Buses will be charged at the Michael J. Quill Bus Depot on West 41st Street and 11th Avenue, MTA officials said. The agency will have all electric-bus fleet by 2040.

Posted by The Hub Chronicles at 8:00 PM