* I KNOW THIS HAPPENED LAST WEEK AND I APOLOGIZE FOR THE LATENESS OF THIS ARTICLE POST. PLEASE READ AND ENJOY. THIS POST IS FROM 1/9/2020
MTA Pulls Bombardier R179s Off The Rails Due To Door Malfunctions-SHADY, SHADY LEMONS 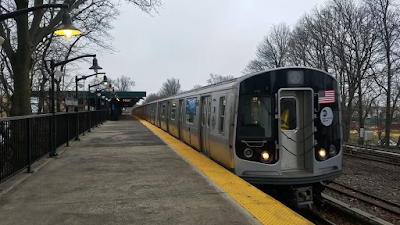 NEW YORK, NY-The MTA said Wednesday (January 8th) that it has pulled nearly 300 newly delivered subway cars for safety reasons effective immediately, citing an analysis of "two recent incidents" involving doors. No passengers were injured in either case. One of the incidents involved the doors opening while the train was moving, putting passengers at risk. The problems with the Bombardier trains happened "over the holidays," possibly in late December and early January. A train opened by four inches during motion, but not wide enough where a person were able to fall out of the train. In total, 298 cars were pulled from service overnight; the affected cars were on the A, C, J and Z lines.
According to NYCT President Andy Byford aka Daddy Train said this statement: "our team proceeded to pull all of the R179 fleet, all 298 cars, out of service and replaced them with spare cars, specifically R46s on the A, R32s on the C, and R143s, R160s, and R42s on the J. That’s for a total of 298 cars, representing around 5 percent of our total fleet."

The MTA said all lines were operating at normal service levels Wednesday morning with the exception of the J and Z lines, where "headways have been increased by two minutes in between trains for the AM peak period, and skip-stop service suspended." In a statement, NYCT President Andy Byford said two recent incidents with the Bombardier R179 subway cars raised questions about "the reliable operation of a door mechanism" on the newly delivered cars.
"Out of an abundance of caution, NYCT removed all R179 train cars from service overnight for thorough inspection and re-deployed other spare cars to continue service for this morning’s rush and ensure minimal impacts to customers," Byford said Wednesday. He added that "the MTA has identified repeated issues with Bombardier’s performance and finds this latest development unacceptable. We intend to hold the company fully accountable.” Seen here are the MTA inspecting the doors of the R179s at the East New York Yard.
New York City Comptroller Scott Stringer blasted the MTA in a statement shortly after the news, saying his office released an audit last month that showed how its contract with Bombardier was late -- three years behind schedule -- and cost taxpayers "millions" of additional dollars. Stringer said that audit showed layers of mismanagement in the MTA's oversight of the contract, repeat failures to meet contact deadlines, poor project management, technical breakdowns and structural defects that delayed cars being put into service. Other defects had cars yanked.
"The New York City subway riders who foot the bill for the MTA’s $600 million contract with Bombardier were promised new, state-of-the-art train cars to help modernize our ailing transit system," Stringer said Wednesday. "Now, all the cars that were delivered so far have been pulled from service due to critical defects. It is completely unacceptable."
Scott Stringer said this as a statement," Bombardier sold us lemons. Straphangers need the MTA to manage these contracts from the beginning -- before the trains go off the rails." Kangni, the door operator supplier to the Bombardier R179s have failed to calibrate the doors. There were lots of blames to be shifted around by this door malfunction issue; Stringer blamed the MTA for failing to purchase quality products; the MTA blamed Bombardier for faulty equipment; and Bombardier blamed their subcontractor Kangni for the door malfunctions.
Bombardier should be ashamed of themselves. You have a fresh NTT right off the production line and the doors just open slightly mid-ride. Back in 2012 when Kawasaki and Alstom protested you guys awarding the R179 contract order to Bombardier,the MTA should've listened. Luckily, the relationship between the MTA and Bombardier is so severed due to this mess of a contract, that Bombardier will not manufacture trains for the MTA no more. Don't get me wrong, I like Bombardier but their performance of this contract was shady as hell. The contract was so behind schedule that everything was rushed, nothing was done correctly. Lets hope that everything gets resolved, so that the 179s can operate service again. NEW YORK, NY-If you live in Flushing, Willets-Point, Corona, Elmhurst, Jackson Heights, Woodside, Sunnyside, Long Island, East/West Midtown Manhattan,and Hell's Kitchen/Hudson Yards/Chelsea near the (7) or use the (7) to your day-to-day commute, then you're in for a enjoyable ride.

Riders on the 7 line have a new voice as they pull into each station stop: Queens' own celebrity, Awkwafina. The rapper and actor will be giving her own spin on subway announcements on the line in Manhattan and Queens through Jan. 22, which is when her new show "Awkwafina is Nora from Queens" debuts on Comedy Central.

The show is a semi-autobiographical take on her life growing up in the borough. Awkwafina, who was born Nora Lum, originally lived in in Stony Brook before her family moved to Forest Hills when she was just a toddler.
The recorded messages done to promote the show come with funny little asides and just a hint of New York City sass that locals are likely all too familiar with.
Most riders seemed to not have noticed the new voice but some enjoyed the change in style from the usual monotone voice that comes on. Some of her announcements even solicited laughters from straphangers.
Here are some of announcements that are played on the (7) Line in endorsement of the new show;
Bronx-native star, Kerry Washington, congrats Lum on making the announcements on the (7) via twitter. She says she's available for the (6) Line anytime. Riders want to see other stars such as Jennifer Lopez and/or Cardi-B to do announcements on other lines. If that happens, I want J-Lo to voice the (4), Cardi-B for the (2) and/or (5), and Kerry Washington to voice the (6).
Make sure to watch the premiere of "Awkwafina Is Nora From Queens", which will premiere this upcoming Wednesday 1/22/2020 at 10:30pm on Comedy Central. Hell, I know I will checking this show out.

Posted by The Hub Chronicles at 8:00 PM