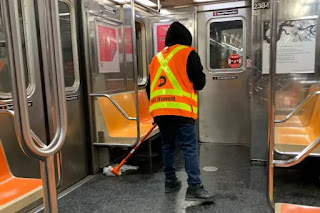 NEW YORK, NY-The MTA has gone full lengths to stop the spread of the coronavirus. The agency dispatched its entire workforce cleaning and disinfecting trains, buses and stations around the clock to stop the deadly coronavirus from spreading, according to a public health expert. But the transit agency’s plan to clean frequently used surfaces in stations once per day and trains and buses every 72 hours is likely the “best they can do” under the circumstances, said Anthony Santella, an associate professor of Public Health at Hofstra University.

As of noon Tuesday, the MTA said transit workers had disinfected 420 subway stations, 1,905 subway cars, 1,974 buses, 300 Long Island Rail Road train cars, 60 percent of Metro-North’s rolling stock and 64 of its 124 stations, Chairman Pat Foye told reporters at a press conference in lower Manhattan. Penn Station and Jamaica; key stops on the LIRR; were also cleaned Monday night, and cleaning is underway at the railroad’s remaining 120 stations, Foye said. The agency is also transmitting a public service announcement across its properties advising riders to wash their hands and cover their mouths when they cough or sneeze.

The MTA’s new cleaning regimen comes as two coronavirus cases have been confirmed in the New York City region; a woman who recently traveled to Iran, but did not take public transit since returning, and a Westchester lawyer who commutes into the city. The agency said it does not know if the second confirmed COVID-19 patient or his relatives had taken public transit since contracting the virus. My advice to all my fellow New Yorkers out there is that if you’re sick, please stay home, make sure to wash your hands thoroughly (at least 20 seconds), utilize hand sanitizer, and use your arm as your shield to cover your mouth.

Water Main Break Near The (L) Line In Brooklyn 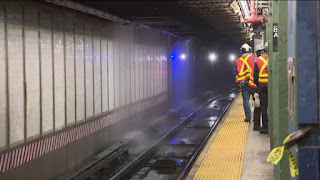 BROOKLYN, NY - A water main break caused a major disruption on the L train subway line on Wednesday, forcing transit officials to briefly shut service between Brooklyn and Manhattan and upending the morning commute for thousands of people. The water main break drove water into the subway system around 4:30 a.m. near the Bedford Avenue station in Brooklyn, officials said.
As a result, transit officials suspended service for roughly three hours between the 14th Street-Union Square station in Manhattan and the Myrtle Avenue station in Brooklyn. The Metropolitan Transportation Authority, which operates the subway, was running the L train line in two sections — one in Manhattan and one in Brooklyn. By about 7:30 a.m., the agency reported that L train service had resumed under the river but with “extensive delays in both directions.”

New York City has nearly 7,000 miles of water mains, and is often plagued by breaks that cause flooding and damage building and critical underground infrastructure, including the subway. The city spends about $400 million a year to replace the pipes. On average, at least one water main still erupts each day, though only a few draw much attention. In January, a water main break flooded the 103rd Street station near Central Park, forcing the temporary suspension of service to large sections of the A, C and D lines. A few days before that, another break flooded a swath of the Upper West Side around Lincoln Center, temporarily shutting service on the No. 1, 2 and 3 lines, with no trains running between Midtown Manhattan and the Upper West Side.

The delays angered subway riders along the (L) in both Brooklyn and Manhattan. My advice to my fellow New Yorkers is to study up and memorize the whole subway system and to also, utilize subways and bus apps. So, that way, all of you can plan your detours and reroutes in case if something else happens along any subway line you travel along.

Posted by The Hub Chronicles at 12:15 PM