MTA Bosses Lay Back While The Workforce Is Left Along To Fend Off Against COVID-19; Congestive Pricing Put On Hold 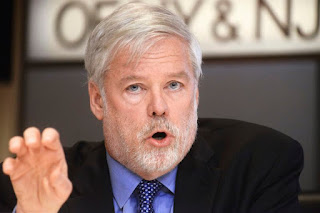 NEW YORK, NY-Are MTA employees expendables? Does MTA CEO/Chairman Patrick Foye and Interim NYCT President Sarah Feinberg need to go?  At least 83 MTA employees have died from coronavirus — and agency chairman Pat Foye on Wednesday said he believes he’s done everything in his power to keep his workers safe from the disease. Foye declined to say at a news conference whether he has any regrets over the agency’s response to the pandemic, which included a decision throughout the first four weeks of March to follow guidance from the Centers for Disease Control and Prevention that said workers should not wear protective face masks.

The virus has spread rapidly among New York City’s front-line transit workers over the past six weeks. The Metropolitan Transportation Authority has confirmed 3,048 cases of COVID-19 among its workforce of roughly 71,000 people, at least 2,636 of whom work in the agency’s subway or bus divisions. All but three of the MTA employees who have died from the disease worked in subway or bus operations.

MTA chief safety officer Pat Warren on Wednesday said the agency has “served as a leader in the transportation industry” when it comes to the response to the pandemic. He pointed to Foye’s decision to change its guidelines around the use of masks days before the CDC did the same, and said initiatives like temperature checks in some work areas and the move to only allow rear-door boarding on buses to keep riders away from operators has helped contain the virus.
Foye and other top MTA brass on Wednesday repeatedly thanked front-line transit workers for their service and sacrifice, and said they would erect a memorial for employees who lost their lives as a result of the pandemic. Union leaders said the gratitude wasn’t enough. Transport Workers Union Local 100 president Tony Utano said the transit honchos should provide additional pay for workers who put their health on the line. Foye on Wednesday said the feds should foot the bill for the hazard bonuses.

Utano said this in a statement, “The risks transit workers face every day, and the sacrifices that have been made, demand they receive hazard pay from the MTA. Elected officials at all levels of government agree transit workers deserve hazard pay. Officials can pass legislation to reimburse the MTA at a later date, but my members should not have to wait for that to happen.” So far 83+ workers have passed away due to COVID-19 compilations. This is far from acceptable. What are Foye and Feinberg going to do to stop the death count from increasing?

This article from The Guardian that I read the other day was sad and heartbreaking. It’s about the MTA employees has come down with the coronavirus and has to stay in quarantine until the symptoms wear down. The TA bosses are not equipping their employees with the protection they need while interacting with passengers/customers. If something is not done about this, the entire TA workforce would end up going on a strike and it wound not be pretty, so please, Foye and Feinberg, treat your workforce better. Equip them with tools and necessities to be safe out there. People have been calling out sick due to lack of protection from this deadly disease. On a serious note, if Andrew Byford was still NYCT President, he would've put serious pressure on CDC to send for 20,000+ masks, gloves, equipment etc for his workers/colleagues. Please keep the MTA workforce as well as the entire world in your thoughts and prayers.

In other news, because of this coronavirus pandemic NYC has put a hold on congestive pricing. The MTA has also put a hold on all bus and railcar deliveries. All major projects has been put on hold until further notice. The redesign networks for all bus divisions have been put on hold as well major projects and construction has been put on hold as well. I don't think its a bright idea to delay the congestion pricing because the MTA desperately is gonna need all the funding they can get to give this system a complete overhaul.

Posted by The Hub Chronicles at 2:49 PM