Former New York City Transit President Andy Byford To Lead TfL (Transport for London); Will Byford's Projects That He Implemented In NYCT Ever Looked At?

*Normally, I do posts on Thursday, but due to the popularity of this developing story, it will be posted on Wednesday, May 27th, 2020, which is today, lol. 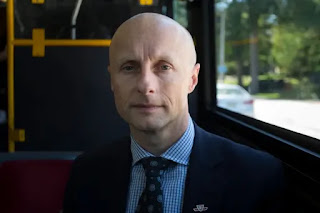 LONDON - Sir Andrew "Andy" Byford has landed a brand new gig (or position) in his hometown of London, England. The former NYCT President and ex-CEO of Toronto Transit Commission (TTC) has recently been appointed to be the new commissioner of Transport for London (TfL) to succeed Mike Brown (who is the current commissioner, who will be at his post until July 10th, due to the COVID-19 pandemic). Brown on the other hand, will become  Byford will begin his new post on June 29th. This is the second time Byford has now work for TfL since his career start in transportation back in 1989. He will earn the same salary as Mr Brown, which is £335,000 (in U.S dollars, that’s $409,604.50), plus a performance-related bonus worth up to half of his salary. He has chosen not to accept a relocation grant.

Andy Byford said this in a statement;

"I am delighted to be taking up the role of commissioner and to have been chosen to lead the organization where I started my transport career over 30 years ago. In the wake of the Covid-19 pandemic, all transport authorities around the world will need to reimagine how their services and projects contribute to the safe and sustainable re-start of the social and economic lives of the cities they serve. It is a huge challenge, but I know that Transport for London has some of the best people anywhere in the world and we will meet these challenges and will together help build an even better city for everyone.”

I, for one, am truly happy for Andy Byford, because after stepping down from his post as our NYCT president, he went back to the U.K. and landed a post with TfL (Transport for London) as their new incoming commissioner. We all know that Andrew got the skills, plans and brains to modernize TfL, just like with Toronto Transit and New York City Transit. Speaking of NYCT, with Byford becoming the new TfL commissioner, the plans he instilled in the Subway Modernization plan within 10 years and redraw of the bus network hangs in the balance. Who's gonna pick up where Byford left off ? Not Foye. Not Interim President Feinberg, who was appointed by President Trump this week to run Amtrak. Wow, some promotion; listen, if Trump wants her for Amtrak, he can have her. We need a NYCT President who has the best interest at heart for the transit workers, riders, communities that the trains/buses serves just like what Byford did. I just hope that Byford does en excellent job running TfL, it'll put Cuomo to shame and make him feel guilty of how the way he treated him.

In other news, a group of rowdy people, literally jumped a Bx42 bus that was bound for the Bronx Park Towers in the Throggs Neck section. Who on green earth are these people and who raised them to act like this. They really put the "Zoo" in Bronx Zoo. Interim NYCT President Sarah Feinberg was recently interviewed by the New York Magazine. She still commutes on the subways despite controversy. Byford is no longer NYCT Boss because of Cuomo; Feinberg is here as Interim President because of Cuomo. He had offer her a position to be the MTA Chairman (or Chairwoman); she declined due to the fact that she had a baby at the time.

What do you guys think about this week's story? Please let me know in the comments down below.

Posted by The Hub Chronicles at 6:17 PM