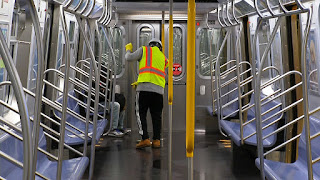 NEW YORK, NY - The MTA, alongside with other transit/transportation agencies around the US, now request over $9 Billion overall from Congress to compensate for the 90% decrease in ridership since mid-March. If the TA doesn't get the funding, the money could be coming out of the commuters pockets. So, here's how the funding plays out, $3.9B in federal emergency funding, $3.9B to keep service intact, and another $3B from Congress. The TA recently started overnight cleanliness of the subway system, just last week. The Trump Administration agreed to provide the MTA with the funding. The agency projects an $8.9 Billion loss of revenue in 2021. NYCT is not the only MTA sub-agency with a huge drop in ridership; there's also Long Island Rail Road and MetroNorth. Also, lets keep in mind that we are the largest mass transportation system in North America with over 8 million passengers daily.

Republican City Councilman Joe Borelli of Staten Island said this in a statement;


“These transportation revenue bonds rely on revenue to actually pay their debts, so these are debts that have to be paid through the collection of fare and tolls so when people aren’t riding the trains and people aren’t going over bridges as much as they used to, they just don’t have the ability to pay that.” He expresses his concerns for the commuters if the federal funding does not pull through. “You’ll see draconian(harsh/severe) service cuts. But since we have to pay those debts from our revenue, you’ll see the need for fare increases and toll increases, which is something nobody wants.”

Due to this deadly COVID-19 global pandemic, all of the MTA's major projects are on hold. The only project that was done so far this year was the (L) Canarsie Tunnel Rehabilitation Project. The fleet swap between the Jamaica and Coney Island Yards has neared its completion as all R46s from Jamaica are now at Coney Island, while CI still got a few R160s left, sitting at the barn. The remaining R160s will be moved to the Jamaica Yard in Queens. Second Avenue Subway Phase II construction is on hold. The construction of the R211s are underway as the Kawasaki Plant House resumed work as of last month. We won't be able to see the first R211A train set until next year; the same also applies of the R211Ts (the open gangway cars). For all of you (N), (Q), and (W) riders that are complaining about the old trains (R46s) running on your line, know this, you are in for something much better later this decade, the R211s. Lastly, social distancing markings have been implemented on the plaforms of the 51st St (Lexington Avenue)/Lexington Avenue-53rd Street station, hope all goes well that.

The state of the buses. Recently, the TA installed plastic barriers to create distance between the driver and the passengers other than using chains. The retirement of the 2004-2005 Orion VII 2nd Generation Hybrid-Electric buses are on hold. The delivery and manufacturing of the new XDE40s by New Flyer and the LFS HEV and LFS by Novabus. The B1 bus route was originally up for route articulation back in April. That's also on hold. Just yesterday, the Flatbush Bus Depot in Brooklyn set up a bus outside of the Flatbush Junction station for subway employees, cramped underground with no space to practice social distancing. This COVID-19 pandemic has embolden criminals to assault transit employees with no consequence. A female conductor was sexually assaulted inside her cab on a (3) train at the Van Siclen Avenue station in Brooklyn by a male suspect and a male train operator operating the (2) train got stabbed after a crazed, knife wielding female broke into his cab under the East River heading into Brooklyn. Both the conductor and the train operator are doing fine, thank the Lord. The attackers have been arrested in both incidents. In other news, President Donald Trump has granted $500M of $3.9B in CARES Act transit funding to our transit system, to keep it clean and functional. He also to both Cuomo and DeBlasio to spend it wisely; can't wait to see how all this unfolds (That's an update of the whole funding from Congress) .

Now time for silly irrelevant stuff. A Tik-Tok video that surfaced on Twitter shows a grown man, who goes by the name of fckjoshy via Tik-Tok  spilling a container full of Fruity Pebbles cereal and milk on the train floor of a Woodlawn-bound (4) Train at 149th St-Grand Concourse. Here's the video down below.

Here is a second video of the same guy, apparently doesn't know how to wear a mask properly and being a MAJOR nuisance to the dear essential workers inside both a Duane Reade drugstore and a pizza parlor.

https://t.co/5lyt3OTKvE he also doesn’t know how to wear a mask apparently. @NYCMayor @NYCTSubway @NYCMayorsOffice @nyc311 really disrespectful to put the rest of the city at risk and make essential jobs even harder at a time where we all need to be working together. pic.twitter.com/P8AduO6Ior
— sami (@samitakesphotos) May 14, 2020

See this is the funny part here. This person, who is white, is acting out for clout, not wearing a mask, not following social distancing guidelines, and being a nuisance. Nothing happens to him, but if it was a black person doing this type of stuff, we all know what happens. If I was a supervisor, I would've let him clean up that train car, give him a mop, a bucket, and let him get to mopping. NYPD needs to ease off on people of color and arrest people, like this one here, being a major nuisance for fame and clout.

Posted by The Hub Chronicles at 5:32 PM