UPDATE: At 2:30 pm Friday afternoon, MTA Chariman/CEO Pat Foye, Interim NYCT President Sarah Feinberg, LIRR President Phillip Eng, and MetroNorth President Catherine Ranaldi all had a press conference on a Action Plan For A Safe Return at Grand Central Terminal. They'll be ramping up service, continuing to deep-clean and disinfect stations and vehicles, reminding riders about precautions to keep everyone safe, including floor decals and station announcements, and making hand sanitizer, masks, as well as, other protective equipment available to riders in stations. 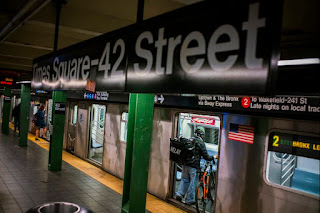 NEW YORK, NY - Amidst all of the anarchy, and violent protest in NYC preparing to implement Phase I on June 8th (can't wait to see how that all goes down), NYCT has yet to implement its own plan of reopening. The city's subway system is the key to economic recovery after over two months ridership decline, trauma, homeless infestation, and lack of leadership/action. The TA officials have yet to make a plan. I highly doubt that one would be implemented anyways due to the overnight subway shutdown, which is still in effect from 1am to 5am, and a curfew for NYC at 8pm. The curfew has been in place due to the rioting, looting, and destruction of property that transpired this past weekend. The TA leaders and Cuomo better think long, hard, and twice before putting anything into action.

Of course, the blame game commences. DeBlasio and NYCT Interim President Sarah Feinberg are now feuding on how the transit system should operate. DeBlasio said this in a short statement this past Friday,“We’re still not getting the answers we need from the MTA. We’ve got to make sure there’s maximum service levels; we’ve got to make sure there’s social distancing and limits on how many people can be in each subway car and in each bus.” First off, DeBlasio needs to SHUT THE HELL UP because years ago, he and that other knucklehead, Cuomo about who should fix and fund the subway system for two years from 2016 and 2017.  Feinberg made a statement in regards to wearing masks while on subway grounds,“If you come into the system and you’re not wearing one you should expect to either be told to put one on, or to leave this system.” Man, that's bold statement from somebody who told her employees during the start of this pandemic to not to wear masks, which contributed to the deaths of near 140 workers. She, nor other agency officials, did not say who would enforce the rules, and how, or whether the MTA would distribute masks to riders or force them to buy their own.


City officials expect 200,000 and 400,000 workers to return to jobs in construction, manufacturing, wholesale and curbside retail businesses when the June 8, Phase One reopening begins. Service will be increased from the reduced runs the pandemic forced upon it: a 90% drop in ridership and 9,000 workers quarantined. Commuters have the option of driving to work in light traffic. The issue came up last week when the New York Stock Exchange directed its employees to avoid subways and buses, and drive or take cabs to work, offering 30% discounts at a parking garage. Nighttime cleaning will continue across the fleet of all MTA sub-agencies.  Chairman/CEO Patrick Foye showered praises in regards to the Ultraviolet light to fight against COVID-19 saying that, “Actually the MTA led the way” and “We were really proud of that.” Oh yeah, Foye, you know what the MTA is also a leader in; DEATHS in the transit sub-agency, due to you, Feinberg’s, and Cuomo’s due negligence, lied about employees not having masks, and flip back-and-forth about whether employees should have mask and gloves or not. That is NOTHING for anyone to be proud of.

In other news, an R179 signed as an (A) train decoupled itself near the Chambers Street subway station early Wednesday morning. This is another never-ending mishap story of the of Bomabardier R179s. Back in January, an R179 (C) train had one of its doors opened mid-ride by four feet. All fleets were pulled from service and were replaced by R32s, R42s (now retired), R46s, R143s, and R160s along the (A), (C), and (J)/(Z) Lines. Fast forward near five months later, a 10-car set decouples, draw-bar breaks, and the intercarbarrier springs stretches out. Bombardier has been a total disappointment since the R179s car order commencement. Two years behind schedule, rushed order, and now, cars are pulled from service once again. I like Bombardier but they have been nothing but turmoil and trouble when it comes to the R179s, not even the R142s caused this amount of trouble back in the early 2000s. It didn't have to be this way but I'm so glad that they are banned from future cars orders. Anyhoo, so, the city is going to reopen on June 8th. Please be mindful to practice social distancing, wear your masks and gloves and stay healthy. All bus and subway service will return to regular service, but please if you're not an essential worker, STAY HOME.

Time for off topic stuff now.....Today, we honor and celebrate the life George Floyd. He was savagely murdered over a fake $20 bill that had nothing to do with him. Us, as citizens of the human race had to witness, on video, of that man, that brother, gasping for air, saying these words, " I CAN'T BREATHE" clear as day. The crime was inhumane, heinous, annimalistic, and purely disgusting.  It gives us New Yorkers an eerily memory of Eric Gardner back in 2014. It took NYC five years to fire Daniel Pantaleo for the death of Gardner; while in Minneapolis, it took protest and uproar to have all 4 cops fired a day later. All officers involved in this brother's death have been arrested and charged; the one cop who had his knee on Floyd's neck and back had been charged with 3rd (now 2nd) degree and manslaughter in the 2nd degree. The other three officers have charged with aiding and abetting. All of us will and should continue to fight of all people of color who were dealt injustice by police officers who abuse their power, and we can do it without the riots and looting. Racism needs to end and we need love, peace, and healing. With that being said, Fly High, King George Floyd, we love you and we miss you.
Posted by The Hub Chronicles at 3:48 PM