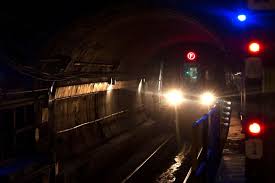 NEW YORK, NY - The (F) Line Rutgers Street tunnel is the last tunnel from the Hurricane Sandy Recovery Work. This work will be eerily similar to the (L) Canarsie tunnel work. If you are an (F) Train rider between Lower Manhattan and Downtown Brooklyn, you are in for a brutal commute of a lifetime, as if the weekend suspended (F) service between Church Avenue and Coney Island-Stillwell Avenue in Brooklyn was not enough. As I mentioned in my late 2016 article post, "Ladies and Gentlemen, we apologize for the unavoidable delay......for the next year or so".

Work on the Rutgers Street tunnel, the final subway tunnel under the East River that needs to be fixed and fortified after Superstorm Sandy, will start next month. The same strategy that was used to fix the Canarsie tunnel will be implemented on the Rutgers tunnel. Canarsie’s rehabilitation began in April 2019 and was completed in April 2020.  This work cost between $50 and $100 million. Prep work is expected to begin on the tunnel, which stretches from Brooklyn’s York Street station to Manhattan’s East Broadway stop, in August and major work is slated to start in mid-September, before wrapping up next spring. We also can’t forget the Culver Modernization Project which will continue all throughout this year and next year. The next two years will be something the (F) line riders will never forget.

The official announcement comes after years of anxious speculation from the (F) line’s 30,000+ riders, who watched for nearly a half-decade as state transit honchos pressed forward with various plans for the (L) train tunnel, which was initially scheduled to be shuttered for more than a year, until Gov. Andrew "Evilize, Grandma-Killing, Control Freak, Hypocrite" Cuomo abruptly halted that plan in favor of a partial closure. Like that scheme, the Rutgers Tube Project will rehabilitate systems and components within the tube that were damaged during Superstorm Sandy and will replace other parts that have reached the end of their useful lives. The project will also see the installation of a cable management racking system, much like the one installed in the (L) line’s Canarsie tunnel, and feature track, signal equipment, and various other communication upgrades. Structural repairs and platform accessibility work at the East Broadway station and the addition of cellular service within the tube is also a part of the new proposal. Full details is on the MTA NYCT Website. For other news regarding our prestigious transportation network from this week, please refer to the to Press Release.

The Rutgers Fix & Fortify Recovery Work comes with service changes during overnights(system closed from 1 AM to 5 AM) and weekends;

What do you guys think about the plans for the Rutgers Street closure? Please let me know in the comments down below.

Posted by The Hub Chronicles at 11:49 AM