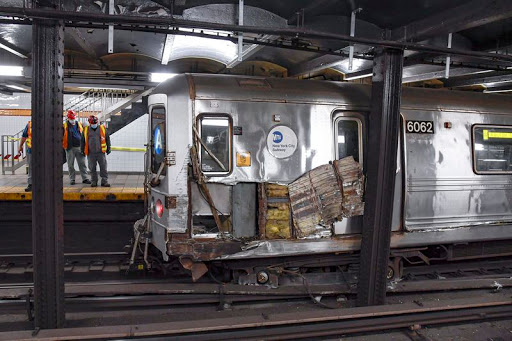 NEW YORK, NY- Crime in New York City has been on the rise. Its subway system has taken a full blunt of that spike. From Sunday until today, there has been a derailment on the (A) line that damaged the skin frame of the first car, the third rail, and loss of power, which left straphangers stranded near 34th St- Penn Station. A Brooklyn woman was assaulted on the subway by a male and a female just for telling them to wear their masks. A female straphanger gets attacked of thwarting attempted theft. An innocent man, waiting for the train, got pushed on to the track. This city is in total awry, thanks to Cuomo (dumb), DeBlasio (dumber), and their retarded a** bail reform/no bail policy.

The (A) Train Derailment

At 8:15 am, an Inwood-207th bound R46 (A) express train pulled up at the 14th St-8th Av subway platform and got derailed. The cause of this derailment was some metal tie plates, known as D plates, which keep the tracks together, was intentionally thrown onto the tracks. Three passengers suffered minor injuries. One refused medical attention, another was treated at the scene and the third was taken to Bellevue Hospital for further treatment. Train crew were not to blame for this incident. This is something a career criminal lunatic would do.

Moments later, a suspect was caught and apprehended. 30 year old Detemtrius Howard of the Bronx caused this derailment. He has an extensive criminal history and threw more clamps just as the (A) train roared into the station. Commuters saw the suspect laughing at the disaster he unleashed, sources said. Good Samaritans held him at the station until cops took him into custody. Police brought Harvard to NYPD Transit District headquarters at the Canal St. station on the A, C and E lines for questioning. He was later charged with reckless endangerment, criminal mischief, assault and criminal trespassing. The brazen act caused one of New York City’s most catastrophic train derailments in years. The train’s first two wheel sets were thrown from the tracks and the front car slammed into four structural pillars, causing its metal siding to peel back like a can of anchovies and its front three door panels to be damaged.

Service was either rerouted, suspended, and/or split into two. The straphangers that were on the (A) that was heading up to 34th St-Penn Station, evacuated from the train safely. Crews had to use a diesel locomotive to tow the derailed subway train to a maintenance yard for repairs and further inspection. Workers also have to replace the large stretch of damaged and destroyed third rail and track components as well as make repairs to structural pillars. The person who caught the scoundrel, Rikien Wilder, caught Howard at the scene of the crime and held him along with some good samaritans for 15 minutes until police arrived. For his heroic deeds and troubles, he was rewarded free unlimited rides for a year and a shirt that says, "Hero Of The Subways" and "New York Tough".

A man was pushed onto the subway tracks by a stranger in Columbus Circle Thursday morning,but got back onto the platform with the help of a good Samaritan. Raphael Mejias, 25 standing on the southbound platform at the 59th Street station around 5:40 a.m. when a man he didn’t know pushed him from behind. He told cops that no words were exchanged.

He was able to get back up onto the platform with the help of a good Samaritan and was taken to Mount Sinai West hospital with pain to the right leg and his rib area. The man who pushed him was described as standing about 6 feet tall and wearing a gray sweat suit. There were no arrests. If you know or seen the scumbag in this incident, please call Crime Stoppers at 1-800-577-TIPS (8477).

Woman Assaulted By Couple After Asking Them To Wear Their Masks

Police is currently tracking down a man and a woman who allegedly assaulted a female after she asked one of them to wear a face mask at a Brooklyn subway station. It happened at the Union Street station on the (R) line around 7:30 p.m. on Tuesday 09/15/2020. According to police, the victim told the woman to wear a mask, which sparked an argument that escalated into an assault and robbery. The male suspect allegedly stole the victim’s cell phone and threw it to the ground while the woman sprayed the victim in the face with an unknown substance. The victim was hospitalized in stable condition. She was petrified to ride the subways again, even though she has been riding the subways for a decade. The agency started issuing $50 fines to riders who are not wearing face coverings in the transit system. 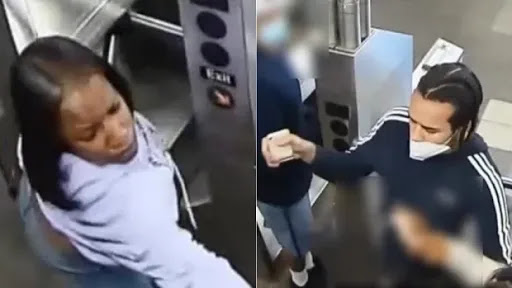 Woman Thwarts Attempted Theft And Gets Assaulted For It 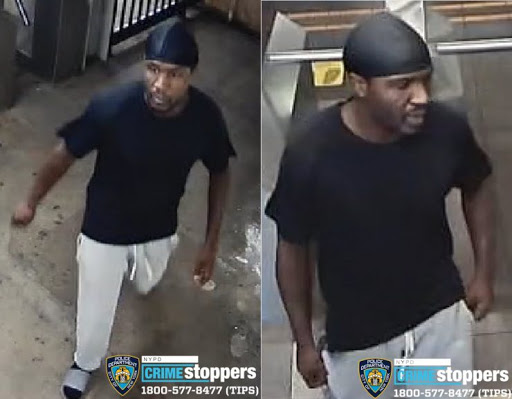 Cops are looking for a suspect who assaulted a woman after she thwarted his robbery attempt on a Brooklyn subway. At 5:30 a.m. on Sept. 20, a 53-year-old woman was riding a southbound (D) train from Columbus Circle when she saw an unknown man trying to take a backpack from a sleeping passenger. The woman told the passenger to wake up, which angered the suspect.

The suspect began to assault the woman by repeatedly kicking her in the face and body. The suspect de-trained at the Union Street station and fled onto a southbound R train, which he rode to the 25th Street station and fled to parts unknown. The victim sustained multiple non-life-threatening injuries to her head and body and was treated at NYU Langone Hospital/Brooklyn.

Photos and videos of the suspect were captured at both the Union Street and 25th Street stations in Brooklyn. The suspect is described as a man in his 30s with a dark complexion black hair and facial hair, a medium build, standing 6 feet tall, and weighing 220 pounds. He was last seen wearing a black durag, a black t-shirt, gray pants and gray sandals.

Anyone with information regarding this incident is asked to call the NYPD’s Crime Stoppers Hotline at 1-800-577-TIPS (8477) or for Spanish, 1-888-57-PISTA (74782). The public can also submit their tips by logging onto the Crime Stoppers website or on Twitter @NYPDTips. All calls are strictly confidential.

Crime in the NYC Subways has been on the rise. Its normal for scondrels to enter the subways and cause trouble because we have politicians who sit back and allow these thing to happen thinking that its normal. Its not and these dumba** politicians wonder why people are leaving NYC in drones. Mayor DeBozio got the nerve to say that the city is thriving; no it isn't. There won't be a New York City if things continue the way they are. In other news, three Metro-North employees are suspended without pay for turning a room beneath Grand Central Terminal into their "Man Cave" with a couch, a flat screen telly, and a fridge. New maternity leave will soon be in order for pregnant female workers. This comes after a female worker sued the agency for the loss of her unborn child while on duty.
What do you guys think about these stories? Please comment below.
Posted by The Hub Chronicles at 11:47 PM