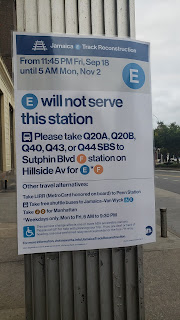 QUEENS, NY - If you are a commuter of the (E) Line in Queens, then you're in for one hell of a ride.
Starting on 09/19/2020, there will be no (E) train service between Jamaica-Van Wyck and Jamaica Center-Parsons/Archer due to track and third rail replacement work. There will be shuttle service, bus routes, cross-honoring by LIRR, and other train services to connect to JFK AirTrain. Some northbound trips will be rerouted via the (F) Line, weekdays and evenings, between 71st Avenue and 179th Street-Hillside Avenue, the last stop, making local stops.

This phase of the project is expected to take six weeks, continuing to the early morning hours of Monday, Nov. 2. Phase 2 of the project, which will restore some (E) train service in the two-station project corridor, is scheduled to begin in early November and last until mid-December. The project plan came into fruition after discussions with Southeast Queens residence and elected officials, along with a project microsite, and virtual community meetings (held on 08/31 and 09/08). The tracks and third rail are 40+ years old (the Archer Ave extension was constructed from the late 70s to the early 80s). It’s at the end of its life and now it’s the perfect time to perform the replacement work on that segment of the line since ridership (present day) is extremely low and air travel is limited.

The service change seeks to minimize impacts to customers. The MTA is making these upgrades now and coordinating alternative travel options in order to prevent emergency track work and unplanned service changes that would create bigger disruptions for customers than the outage being planned. Since 2016, there have been 46 incidents between Jamaica-Van Wyck and Jamaica Center on the (E) line because of track conditions, resulting in 713 delayed trains. The agency is accelerating the project’s timeline by taking advantage of traditionally low late-summer ridership, as well as low airport travel and low general subway ridership due to the COVID-19 pandemic, to minimize the disruption of the work and impact as few riders as possible. The impact on customers is further reduced due to the ongoing overnight subway shutdown between 1 a.m. and 5 a.m., during which there is robust alternate service available on MTA buses.

The work will require a temporary suspension of E Subway train service at two stations: Sutphin Blvd-Archer Av, and Jamaica Center-Parsons/Archer. These stations both have multiple connecting bus lines as well as (J)/(Z) subway service. Sutphin Blvd-Archer Av connects with the Long Island Rail Road’s Jamaica station. MetroCards will be honored at the Long Island Rail Road for travel to and from Jamaica and these stations during Phase 1. These stations are Penn Station, Forest Hills, Kew Gardens, Hollis, Laurelton, Locust Manor, Queens Village, Rosedale, and St. Albans.

What You Should Know

*At this time during the weekends, evenings, and (until 1am) overnight hours, (E) trains will be running over the (F) Line in both directions between 21st St-Queensbridge and Delancey-Essex Sts, the last stop. East Broadway and York St stations will be closed. (F) trains will be running via 8th Av/53rd St in both directions between Queens Plaza and Jay St-MetroTech, due to Rutgers Street tube maintenance.
Commentary Video Review Of This Project:
In other news, the agency is begging for $12B from Congress to continue the work with third-party companies that does construction and development for them. Long Island Rail Road and MetroNorth are educating the masses on rail safety this week. The goal of National Rail Safety Week is to raise awareness of the need for rail safety education and empower the general public to keep themselves safe near highway-rail grade crossings and railroad rights-of-way. Participation in the national week-long education campaign is part of MTA Railroads’ TRACKS program (Together Railroads And Communities Keeping Safe), a joint venture between the safety departments of the Long Island Rail Road and Metro-North Railroad to reach out to schools, camps, day care and community groups. Two guys went off on cops in the subways for not wearing their masks; one of them got called the male version of Karen. Lastly, NYCT's longest, beloved working employee, Frank Gurrera passed away, due to health problems. May his memory remain in our hearts and let his legacy carry on forever. .
Posted by The Hub Chronicles at 10:09 PM