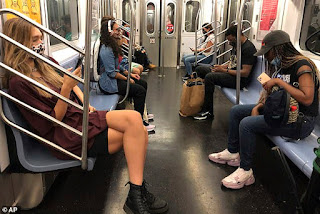 NEW YORK, NY – New Yorkers should have nothing to worry about. Or do they? A report was recently released based on the recent research on the COVID-19 transmissions. No correlation was found between the coronavirus spread and the mass transit system. There was some controversy about whether the cause of the virus earlier in the year had anything to do with the subway and bus operations. The more people follow this protocol, the less transmission rate that New York will have.

An American transportation engineer, known as Sam Schwartz, conducted this research. He stated that risks are low on trains and buses because people spend short amounts of time on them, they don't talk during in transit and masks catch droplets and aerosols. He also argued airplanes, on which people spend long period of time, pose much higher risks to travelers and people face much greater risks in their workplaces than during their commute to work.  In the report, researchers looked at COVID-19 cases in New York City and ridership on the city's transit system between June 1 and August 18, 2020. Over that time period, the number of subway and bus rides increased from 1.25 million per day to 2.25 million per day.

Subway ridership is down about 70%. Bus and commuter rail ridership has also decreased by 50% and 75% respectively. Officials have taken several steps to ensure the public that it is safe to ride again. Millions of dollars have been spent cleaning and disinfecting trains, bused and high-touch point surfaces such as kiosks and turnstiles, and a $50 fine has been implemented for those who refuses to wear a mask during their ride. As if things cannot get financially worse, Mayor Bill DeBalsio has implemented a $1,000 fine for people who are caught without wearing a mask. This comes after reports of a spike of COVID-19 cases in various Brooklyn and Queens neighborhood.

The MTA ridership data also showed that traffic at bridges and tunnels is just 20 percent lower than 2019 averages, almost back to pre-pandemic levels. This implies that commuters have shunned subways, trains and buses. They have switched to using cars and taxi cabs. The report warns of 'long-term health consequences' if the public begins riding in cars rather than on transit systems. He added that cars contribute to air pollution and the acceleration of climate change more than transit. Lastly, he said that people consume more calories when they travel via automobile compared to subways or buses, walk to and from a station burns more calories. We should all heed advice from health officials or we would end up with a second wave of this horrid disease.

In other news, today is the first day of school for all city middle and high school students. Service on these following routes were increased on these routes. OMNY (One Metro New York) has surpassed 21 million taps-a new milestone to be proud of. This past Sunday, MTA Bridges and Tunnels officials have joined the late FDNY Stephen Stiller's family and Tunnel to Towers foundation in retracing the hero's last steps going through the Brooklyn Battery Tunnel (now the Hugh L. Carey Tunnel) with a walk due to the race being cancelled this year because of the pandemic. Lastly, two Brooklyn (President St and Franklin Ave/Eastern Parkway) subway stations have been co-named in honor Medgar Evers, which is a CUNY school located in Crown Heights.

QUESTION: I felt like this video was too long. Do you guys think that I should start a podcast series? And if so, would you guys listen?

What do you guys think about this story? Please comment below.

Posted by The Hub Chronicles at 9:55 PM