Grand Central Terminal & Penn Station Will Be Used As Extended Vaccination Sites Until Saturday, May 29th. Everyone Who Gets The One Dose Vaccine at MTA Sites is Eligible Receive a Free 7-Day MetroCard or 2 Round Trip LIRR or Metro-North Tickets. 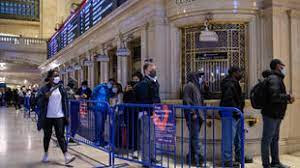 NEW YORK, NY - The Metropolitan Transportation Authority (MTA) announced Saturday that its successful public vaccination program will be extended through Saturday, May 29 at Penn Station and Grand Central Terminal, the program's most popular sites.  The program, first announced by Governor Andrew M. Cuomo, has administered more than 10,000 vaccinations to date at locations throughout New York City, Long Island and the Hudson Valley since May 12. The program will continue to administer the single dose Johnson & Johnson vaccine and has the capacity to serve up to 300 people per day on a walk-in, no-appointment basis.

Anyone, New Yorker or tourist, is eligible to receive the vaccine at either of these locations. Individuals planning on being vaccinated are encouraged to allow for approximately 20 minutes of additional time in their commute to accommodate the vaccination process. Incentives to get vaccinated at the locations include a free 7-day MetroCard or free round-trip Long Island Rail Road or Metro-North ticket.

Digital messaging will run on more than 12,000 screens at MTA stations, onboard train cars, and buses to promote the site locations and hours of operation. Promotional content will be pushed to more than 3 million followers across MTA social media platforms. Wayfinding signage will be produced and posted at station pop-up locations to help ensure proper traffic flow. 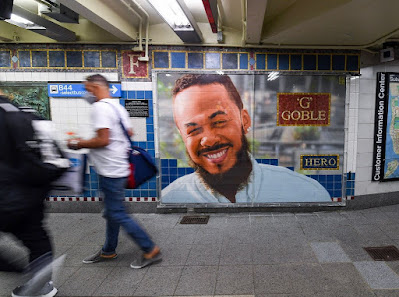 BROOKLYN, NY - MTA New York City Transit officials joined leaders of TWU Local 100 today for the unveiling of a memorial mural and plaque at the Flatbush Avenue-Brooklyn College subway station that honors the life and legacy of former Train Operator Garrett Goble. Goble, a Brooklyn native, six-year Transit veteran and father of two, was tragically killed while on duty last March. Crafted by the Brooklyn artist BK Foxx using acrylic paint and spray, the 8-feet by 5-feet seven-inch portrait of a smiling Goble will serve as a permanent addition to what was Goble's home station. His wife, Delilah, and mother, Vicki, were also on hand for the unveiling and offered remarks.

MTA Chairman Patrick Foye said this in a statement: “Nothing can reverse this unthinkable tragedy or bring back a hero whom we lost too soon. But we hope to provide a space with this memorial where New Yorkers can come and pay their respects to a true NYC hero, and remember and reflect on Mr. Goble’s life, his dedication and sacrifice.”

Delilah Goble, Garrett's wife, said this in a statement: “Garrett grew up coming to this station and I can think of no tribute more befitting of his legacy than this mural. The pain of losing him will never fully go away, but I take comfort in knowing that the thousands of New Yorkers who come through this station each and every day will be greeted by his smiling face. This is a beautiful memorial. Thank you to Sarah and everyone at New York City Transit for helping make this happen."

Tony Utano, President of Transport Workers Union Local 100 said this in a statement: “This is a wonderful tribute to Garrett. Thousands of people will see this mural every day, ensuring that his legacy lives on. His legacy is one of bravery, heroism, selflessness, and service. Garrett made sure his riders escaped to safety. He put his riders first. He saved lives that morning. Think about that. There are people walking this Earth today because of Garrett Goble. TWU Local 100 will never forget what Garrett did. We honor him today, and we honor him every day that we fight to make the transit system safer for workers and riders. We have gained ground. We have made progress. But the struggle continues. TWU Local 100 will fight on because no one should have to worry about their safety in our stations, on our trains and on our buses. That is our commitment. We will fight on with Garrett in mind, and in our hearts. And we will always be there for his family. Always.”

Goble was operating a northbound (2) train at around 3 a.m. on March 27 when an arsonist set fire to a shopping cart, engulfing the train in flames near the 110 St station. More than a dozen customers were also injured in the blaze. In addition to his wife Delilah, Goble is survived by two children and his mother Vicki. We as real New Yorkers, will not stop until justice is served and that Mr. Goble and his family can finally have peace and comfort.

Posted by The Hub Chronicles at 3:47 PM