Brooklyn MTA Bus Crashes Into Three Story Home, Injuring 16 Others; Cuomo Appoints Sarah Feinberg To Be The Next MTA Chairperson Got Axed By State Senate

A Southbound B49 Bus crashed into a brownstone building at Bedford Avenue & Lincoln Road. All involved in the accident are fine with mild injuries, non-life threatening. 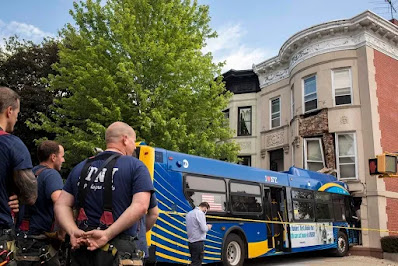 BROOKLYN, NY - Sixteen people were injured, none of them critically, after a Metropolitan Transportation Authority bus crashed into a rowhouse in Brooklyn on Monday afternoon. The bus, traveling on the B49 route, slammed into a building at the corner of Lincoln Road and Bedford Avenue before 2 p.m. It smashed a hole in the first-floor façade and bent a window pane on the second floor. The house, located in the Prospect-Lefferts Gardens was still standing after the crash. Bricks were strewn about the sidewalk in front of the building, which has a doctor’s office on its garden level.

Now, this is the fourth bus accident that happened so far in New York City. In January, an articulated bus made a left turn three times the speed limit and ended up dangling on the overpass of the Washington Bridge in the Bronx. In April, a Bx11 bus collided with motorcycle and caught on fire.  Just three weeks ago, a car got into an accident with an MTA bus out in Staten Island. Craig Cipriano, the president of M.T.A. Bus, which operates the city’s buses, said that the driver, a 55-year-old man, had 13 years experience and no prior collisions. Recently, a surveillance video from the bus cameras shows the moments where the driver came out of his booth to change the route sign hit the red truck in front of him twice, swerved onto the road, hits a parked black pickup truck and ends up crashing into the three-story brownstone building. Here is the video down below, courtesy of CBS New York via YouTube:

Now, in that video, that driver looks like he is dizzy and disoriented, plus in complete and utter shock. The MTA and the Transit Union are at war of words; the TA is blaming the bus operator while the union is blaming the bus's mechanism. The bus is still lodged in the brownstone. Crews had to put up walls to keep people from messing with it. The owner is working with the Department of Buildings to shore up the structure so the bus can finally be removed.
UPDATE: The bus was pulled from the brownstone with no collapse of the building. 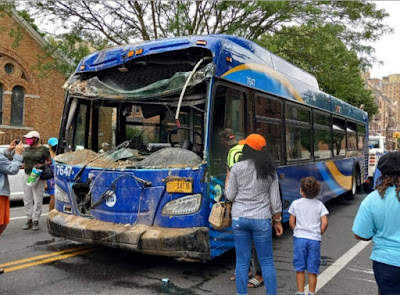 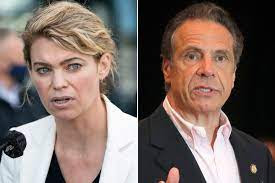 NEW YORK, NY - Governor Andrew M. Cuomo announced Tuesday that the nomination of Sarah E. Feinberg as Board Chair and the appointment of Janno Lieber as the CEO of the New York Metropolitan Transportation Authority. Pat Foye, who has led the agency as President as well as Chairman and CEO for the past four years, will leave the agency July 30 and will step into a new role as Interim President and CEO of Empire State Development.  This would make Feinberg the first female MTA Board Chair and take the post after leading New York City Transit through the worst public health crisis in over a century. Lieber will serve as CEO effective July 30 after shaping the agency's historic $51.5 billion capital plan and driving the agency's robust construction efforts during the COVID crisis as President of MTA Construction & Development.

Feinberg has served as Interim President of New York City Transit since March 2020, where she led the agency's 53,000-person workforce through the COVID crisis. During her time as Interim President, and recognizing the importance of riders returning to transit, Feinberg has relentlessly focused on ensuring service, safety and security for customers and transit workers. Throughout the pandemic, as other transit agencies scaled back service dramatically, NYC Transit maintained significant levels of subway and bus service.  She and NYC Transit also launched a groundbreaking cleaning and disinfecting campaign during COVID-19, implemented the nation's first mask mandate on public transit, and added additional security measures to the system including an aggressive security camera program.

Transit, under her watch, also launched the successful family liaison program, focused on caring for the families of MTA employees lost to COVID and the distribution of COVID family benefits. Under Feinberg's leadership, NYC Transit also launched a first-of-its-kind memorial honoring those lost colleagues, which drew national praise. Feinberg has also focused on the culture of transit in the New York Metropolitan region, launching a program with social media influencer NY Nico, which brought iconic voices to subway announcements.

Lieber currently serves as President of MTA Construction & Development, an 1,800-person organization he built from the ground-up. Lieber oversaw the approval of the groundbreaking $51.5 billion 2020-2024 Capital Program. He successfully managed the on-time and on-budget completion of the L Train Tunnel Project, the Long Island Rail Road Double Track, the historic completion of 11 ADA stations in 2020, and the rehabilitation of the F-line Rutgers Tube in record time - the last of the Superstorm Sandy-damaged subway tunnels. His portfolio includes ongoing megaprojects like East Side Access, the $2.5 Billion LIRR Third Track project, Metro-North Penn Access (which will add four new stations in the East Bronx), Penn Station reconstruction and expansion, and Phase 2 of the Second Avenue Subway, which will extend the line through East and Central Harlem. He also helped spearhead the agency's successful efforts to secure $14 billion from the federal government in the face of the pandemic-induced financial crisis.

Prior to his work at MTA, Lieber served as President of World Trade Center Properties for 14 years where he managed the multi-billion-dollar development of Silverstein Properties' projects at the World Trade Center. Before that, Lieber headed public-private development at Lawrence Ruben Company, and, as a consultant, worked with clients such as Chicago Transit Authority, New Jersey Transit, and Penn Station Redevelopment Corp. - the agency then responsible for the Moynihan Train Hall project. During the Clinton Administration, Lieber served as Deputy Assistant Secretary and Acting Assistant Secretary for Policy at the U.S. Department of Transportation. Earlier in his career, Lieber practiced law at the New York firm of Patterson, Belknap Webb & Tyler and served as a transportation policy advisor in the office of New York City Mayor Ed Koch.

BUT WAIT! THERE’S A TWIST! A bill that would have split up the MTA’s top leadership post and made Sarah Feinberg the authority’s first female chair is dead in Albany, following opposition from lawmakers. The legislation, backed by Gov. Andrew Cuomo, was introduced late Tuesday and would have split the MTA’s chair and CEO roles, with Feinberg selected as chairwoman and Janno Lieber, presently the MTA’s chief development officer, appointed CEO. State Senator Alexandria Biggati (D-Bronx) said this in a statement: “What we need is not to be like splitting roles in the MTA, I think we need a very strong person at the helm. We need somebody there who is not going to just be a figurehead. We need somebody who’s going to be a leader, because our MTA has been a problem for a while.”  The cancellation of this bill will show Cuomo that his bullying and power-tripping behavior will not be tolerated.

You can listen to the full podcast episode on Anchor.
Posted by The Hub Chronicles at 1:54 PM