NEW YORK, NY- If you are a weekend passenger on the (C), (E), (F), & (G) Lines, then you are in for a commute of a lifetime. MTA New York City Transit announced last week that service changes during a pair of August weekends on these lines mentioned above, which will bring “the G to the Sea” by extending the line more than 5 miles, to Coney Island. The train normally terminates at Church Av in Kensington, Brooklyn, since the line was extended there from Smith-9 Sts in June 2009 in planning of the Culver Line rehabilitation, later made permanent on July 16th, 2012 by then MTA Chairman/CEO, Joe Lhota.

The temporary service change will take place during the weekends of August 6-9 and 13-16 and is being made to support the final portion of critical post-Superstorm Sandy work to rehabilitate the tunnel the (F) train uses when traveling between Manhattan and Brooklyn. During these outages, crews will also install cables in the vicinity of Jay Street in order to support the ongoing signal modernization work between Church Avenue and Coney Island. In order to support customers, the MTA will provide several alternative service options. Transit has begun displaying posters and relevant service change information on digital screens throughout the impacted areas to inform customers of the changes. The agency will also send alerts to email or text message subscribers, and via social media.

The bulk of the tunnel work was completed during the spring after crews spent 17 weekends and dozens of weeknights working to install new tracks, signal equipment, communication cables and tunnel lighting. Workers also performed considerable upgrades to the East Broadway station in Manhattan, including nearly 12,000 square feet of platform renewal, 13,000 square feet of wall tile replacement, 1,360 feet of platform edge removal in addition to a range of leak mitigation work. The construction timeline on the Rutgers tube was the fastest of all the Sandy-related tube rehabilitation projects.

I know that I have not done an article for the month of July, but I do have news and events that did transpire for this month. Let us recap on what happened shall we? 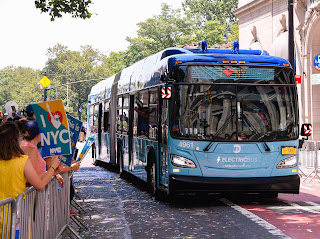 Posted by The Hub Chronicles at 7:55 PM No comments: